Unfortunately, salt-encrusted ponds near Menlo Park’s Bedwell Bayfront Park have become a popular selfie spot and humans are invading nesting areas for small birds called Western Snowy Plovers, who are listed as “threatened” under the federal Endangered Species Act. These shy birds nest in the middle of barren salt flats and tiny chicks may be underfoot. Birds are also frightened by drones, bikes or other disturbances. Please heed the new signs we’ve erected banning drones, bikes, dogs and people from salt flats next to the park. Please find spots within the park to take your selfies – help start a new trend!

Bedwell Bayfront Park was built on the site of a former landfill. The landfill has been turned into natural-looking hills covered with grasses, bushes, and scattered eucalyptus and pine trees. A complex network of paths covers the hills. They range from old paved landfill roads, to new smooth gravel bikepaths, to narrow rugged footpaths. Surrounding the hills are former salt ponds, salt marshes, and sloughs. Along the park road are several parking lots and a restroom.

An overview at the top of the hill, built by the South Bay Salt Pond Restoration Project, looks out over ponds managed by the Don Edwards San Francisco Bay National Wildlife Refuge, including Pond R4, planned for restoration to salt marsh in coming years, and Greco Island – one of the largest remaining tracts of historic tidal salt marsh in the South Bay.

Directions: To reach Bedwell Bayfront Park, take the Marsh Road exit in Menlo Park from Hwy 101 and head toward the Bay. At the end of the road, past Bayfront Expressway, is the park entrance.

More information: City of Menlo Park page for the park

Edging the Dumbarton Bridge, the Refuge’s Ravenswood ponds offer views of shorebirds and the Bay. South of the bridge, Pond SF2 provides shallow water bird habitat and man-made nesting islands. A Bay Trail spur for walking and bicycling, 1.4-mile round-trip, edges the pond along the Bayshore.  Two platforms overlook the 260-acre pond’s waters, providing spots to view and photograph shorebirds and ducks. During the spring and summer, nesting terns and American avocets can be seen using the islands.

Pond R1 is the largest of the Don Edwards Wildlife Refuge’s ponds.  It is located on the northwest end of the Dumbarton Bridge. From fall to spring, this pond is a good place to see foraging shorebirds and dabbling ducks. The Ravenswood Trail at Pond R1 is nearly a loop at 3.25 miles.  It is approximately 4 miles total when returning to your car.  The trail is closed to hikers and bicyclists during waterfowl hunting season in late October to late January.  Check the Refuge’s website for dates.

The SF2 and Ravenswood trails connect to the Bay Trail that crosses over the Dumbarton Bridge, offering great views of the Restoration. The east side of the bridge leads to the Refuge Visitor Center at 2 Marshlands Rd, Fremont. 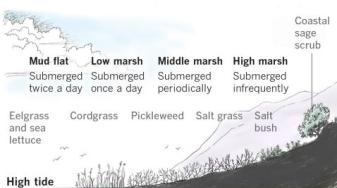 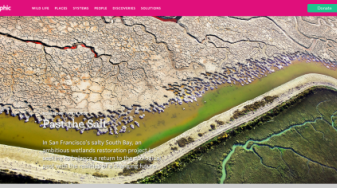 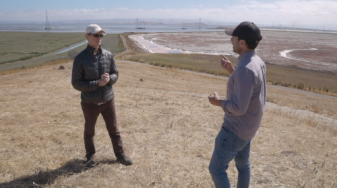 We're Losing Our Marshlands and That Could Cost Us Our Homes
LX
October 13, 2022
Alviso Eden Landing Ravenswood 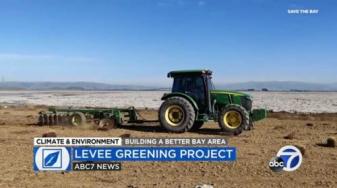 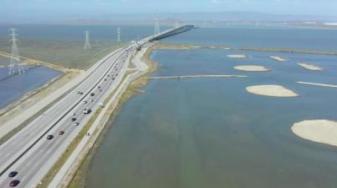 This calendar section lists upcoming events that provide opportunities to gather together and learn about, visit, or engage with the South Bay Salt Ponds.

We encourage you to return later to see the latest events as they are added.

Here are our past events.

Documents Related to this Pond Complex